Thai food was introduced to New Zealand around 1960. In mid 1980 the first Thai restaurant opened in Christchurch and became popular.

In mid 2004 Ton opened Ashburton’s first Thai restaurant called “Charming Thai”. With loyal support over the decade, he decided to use the name ‘Ton’s Thai’ to represent Ashburton’s Thai Restaurant. We look forward to giving the best service and quality food to you.

Thank you for your patronage 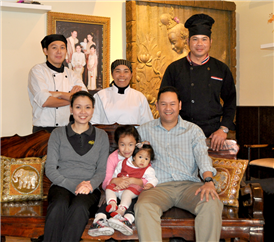